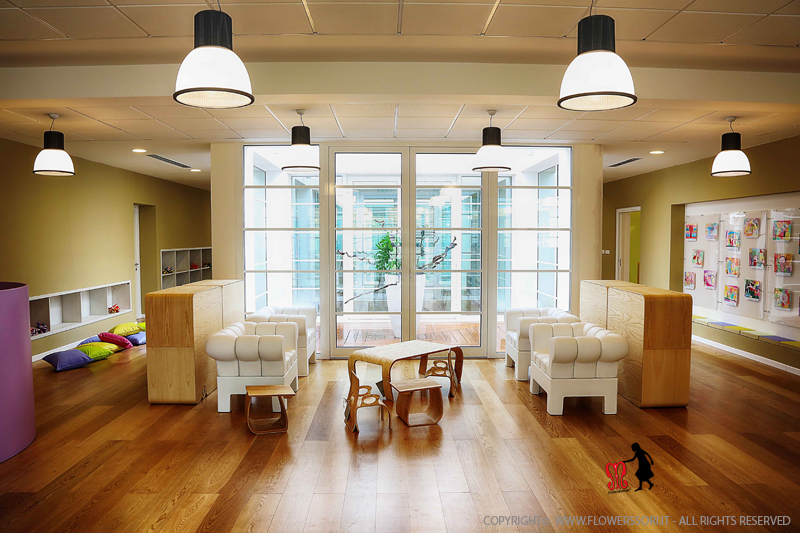 The contemporary style of the school’s architecture places great importance on ecology and sustainability which is completed with the natural touch of Flowerssori’s ecological furniture line for children.  The school has been given a certification of class A+ through tests by CasaClima, to the “Green” vocation of the entire project.

Spaces were conceived functionally and dimensionally by a team of designers and educators who respected not only the point of view of children but also the idea that the school has to be child friendly.

The project to furnish the school was carried out by Flowerssori Srl (Pisa-PI) along with Lo Spazio Pensato (Fauglia-PI) and Arredi 3n (Giussano-MI). The school, because of it’s eco-compatible and eco-sustainable characteristics along with it’s Class A certification by CasaClima, has three grades and can host up to 86 children. The architectural project was coordinated by the Colucci&Partners architecture firm of Pontedera (Pisa) and was carried out by Campigli Legnami of Empoli (Firenze).

The Mayor of Cascina, Alessio Antonelli, declared “The San Frediano kindergarten is an excellent model of respect of the environment and eco-sustainability that we would like to continue to follow. A school that has a welcoming environment which in and of itself is a determining factor in children’s education. For this reason the San Frediano grade school is furnished with elements that correspond to the teachings of Maria Montessori. We used one of her quotes at the inauguration: To help a child we must give them an environment that allows them to freely develop.” Wanting to give the children and the public purchasing body an environment as versatile as possible that corresponds with the educational hypothesis that formed the foundation of the project, Flowerssori developed a series of personalized furnishings for the school.

This is how we created a new line of wooden tables with the top surface covered in a layer of white laminate which  not only renders it attractive but also useful and hygienic. Tables were placed in the school cafeteria and in other areas where “messy activities” are carried out.

Every detail was closely studied with the scope of delivering to the young students the best environment in which to study, grow, explore and learn: a true “home for kids”!